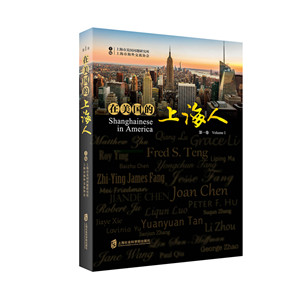 The first volume of Shanghainese in America, compiled by the SIAS and the Shanghai Overseas Exchange Association, was published by Shanghai Academy of Social Sciences Press in November 2016. The book series shows the active presence of a group of Chinese Americans, originally from Shanghai, in American politics, economy, education, culture and society. They have made impressive achievements in their respective careers and considerable contributions to the development of China-US relations.

A sister project of Americans in Shanghai – another book series compiled by the SIAS, Shanghainese in America also looks into the eventful life of the featured individuals. Looking back at when these Chinese people first set foot on American soil, the book sheds light on the challenges they have met and unveils how they managed to overcome them. By telling the stories of these Chinese Americans and by sharing their views on China-US relations, the book serves as a tribute to their contributions to promoting Chinese culture in the international community.

The book offers a vivid illustration of the extensive people-to-people exchange between China and the US. While the academia is full of meticulous researches on China-US relations, this book series provides a fresh angle: how local, interpersonal, and non-governmental exchanges benefit mutual understanding and bilateral relations.

Various organizations supported the compilation work of this book series, including the Overseas Chinese Affairs Office of the Shanghai Municipal Government. Future volumes of Shanghainese in America will follow in the coming years.